New England is headed for a "significant recession," according to the Wall Street Journal. Unemployment, currently 5.5% in Massachusetts, is projected to peak at 8.3% in mid-2010. These projections were released by The New England Economic Partnership (NEEP). 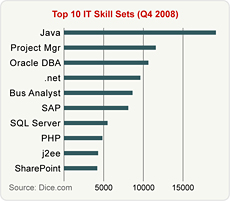 Despite the doom and gloom, work is reasonably plentiful for technology workers with the right skills. According to a monthly report from Dice.com, demand in the Boston area remains reasonably strong for technology professionals with the following skills and experience:

The Top 10 Skill Sets most in-demand at Dice.com are listed here.

Project management experience is valued more than any other skill except for Java. According to a survey published in The Dice Report (pdf) here are the three best ways to demonstrate project management skills in your job hunt:

Despite gloomy economic headlines, the long-term future for technology workers in Massachusetts looks bright, according to two new reports.

The principal driver of the New Economy is the information technology revolution.

"This 'IT engine' is unlikely to slow down anytime soon. For the foreseeable future, the most promising New Economy advances will relate to a state’s ability to use information more effectively."

A second report reveals that Massachusetts continues to outperform all other states in technology, and ranks first in venture capital per capita, making it the most attractive state for startups. According to this report:

“A state is competitive if it has in place the policies and conditions that ensure and sustain a high level of per capita income and continued growth.”

The report reveals that Massachusetts ranks first among all 50 states in terms of its economic competitiveness, "its ability to attract and retain business and to provide a high standard of living for its residents over the long run."

A press release about Beacon Hill Institute’s Eighth Annual Competitiveness Report is available for review along with a detailed 68-page report (pdf).

Despite the near-term challenges in our economy, long-term prospects look bright for knowledge workers with technical skills that are valued in the marketplace.

One strategy for surviving an economic downturn is to focus on upgrading technical skills that help organizations deliver superior service to their customers. A list of the Top 20 Web-related skills that offer the greatest potential appears in the right-hand column.

Computerworld released the results of its 22nd annual survey this week. More than 7,000 information technology (IT) workers participated in this year's survey.

The results identify three job categories that received higher-than-average pay hikes over the past year. According to the survey's authors these three types of positions will continue to be in high demand -- even in a down economy:

Skills that are expected to grow in importance in the coming years include the following Web-based technologies:

Here are the average compensation figures for Web-related positions identified as either staff or entry level [salary + bonus = total compensation]:

A chart of other staff and entry-level positions is available for review along with charts for Mid-Level Salaries and Senior-Level Salaries. In addition a Smart Salary Tool is available to help you pinpoint compensation by job title, industry and location.

Check out the Computerworld 2008 Salary Survey to access an interactive map allowing you to View Salaries by Region. Additional articles include "Twelve Ways to Pump Up Your Paycheck" and "Satisfaction, Security & Stress."

The crisis in the financial markets continues. This uncertainty has now spilled over into the technology job markets.

The list of Top 20 Web Technologies in Boston has been updated for November and the sea of red down arrows appears in the right-hand column.

While it would be easy to focus on doom and gloom, our challenge is to set our sights on a future of opportunity. For example, the Greater Boston Chamber of Commerce released a report last week that points to opportunities for those who develop technology skills.

"The data reveals a worrisome trend: Greater Boston is not growing its skilled workforce fast enough to meet employers’ needs, and is unable to fill more than 90,000 job vacancies that exist each year in the region."

"Although staffing difficulties were unique to each firm, it was clear that for many businesses, technical and financial skills are highly valued."

A press release summarizing Greater Boston’s Challenge: Sustaining the Talent Advantage is available for review along with a link to a more detailed report in pdf format.

If you are anxious about the future, take time out -- 17 minutes -- and reflect on a better tomorrow.

"This is our time, to put our people back to work and open doors of opportunity for our kids; to restore prosperity and promote the cause of peace; to reclaim the American dream and reaffirm that fundamental truth, that, out of many, we are one; that while we breathe, we hope. And where we are met with cynicism and doubts and those who tell us that we can't, we will respond with that timeless creed that sums up the spirit of a people: Yes, we can."

Two in-demand IT positions related to the Web include the following:

Web developers are needed as a result of the expansion of Web 2.0 initiatives and interactive web functionality. This expansion has sparked demand for Web professionals experienced in the latest Internet technologies.

Web technology professionals can request a free copy of the Robert Half Technology® 2009 Salary Guide by completing an online request form.

Creative professionals can also request a free copy of The Creative Group® 2009 Salary Guide which provides starting salaries for approximately 100 creative, advertising, marketing, web and public relations positions. This Guide also includes information on major hiring trends and localized salary levels for major markets. A phone call is required to obtain a copy of this guide for creative professionals.

Both Robert Half Technology and The Creative Group are Robert Half International Companies.

A press release summarizes the findings from its work in placing accounting, finance, technology, and administrative professionals and identifies job market bright spots for 2009.