"Through DreamSpark, we are providing professional software development and design tools to university students around the world as a download at no cost."

With those words Microsoft launched DreamSpark in 11 countries including the United States. College students who want to learn programming such as ASP.NET can now do so without the burden of purchasing proprietary software tools.

Web developers in training will receive free, fully functional software from Microsoft, just for the asking! Here are the tools available for FREE download:

Bill Gates is concerned about the future. "During the last decade, the number of college students who study math and science in the United States has declined dramatically", according to Gates. "Today, there simply aren't enough people with the right skills to fill the growing demand for computer scientists and computer engineers."

The giveaway is now available to more than 35 million college students. As the program expands, up to one billion students worldwide could gain free access to Microsoft's development tools, according to an article in The Stanford Daily.

To learn more about the software giveaway check out a Bill Gates interview on Channel 8, Microsoft's internal communication network. You'll need Microsoft's Silverlight software to view this interview. Alternately, you can access a Flash version on YouTube.

The Future is Now

Thus begins what could become the greatest transfer of Web development knowledge from one generation to another that the world has ever witnessed.

If you are a student, now is the time to begin learning SQL Server, C# (C "sharp") and ASP.NET, three of the Top 10 Web Technologies in Boston (see right-hand column for links to more than 1,000 job vacancies that list these skills).

If you are a parent of a teenager, now is the time to ask your child's high school administrators and teachers about their plans to introduce Microsoft tools into the educational curriculum. (Microsoft is expected to extent the software giveaway to high schools later this year.)

If you are neither a student, nor a parent, and still want to expand your career options, you can attend a FREE Microsoft Launch Event in your area and receive FREE Web Development software. The Boston event will be held Tuesday, March 18.

Technology CEOs in Massachusetts remain confident in the state's economy.

Highlights include the following:

More than three out of four CEOs surveyed (76 percent) felt Massachusetts was an "outstanding" or "good" place to run a technology firm.

According to the survey, CEOs at technology companies place education reform at the top of the list of priorities. The Massachusetts technology economy will continue to be vibrant only to the degree that an adequate pool of trained technology professionals enters the workforce. Workers who continue to upgrade their technology skills should excel in the current high tech economy.

The annual survey has been conducted since 1987. To learn more access a story in Mass High Tech: The Journal of New England Technology.

The MHTC council membership is comprised of 99 organizations in Massachusetts. These organizations are most likely to be hiring technology professionals in 2008:

Evidence continues to reveal a slowing in the U.S. economy.

AIGA is "the professional association for design." Graphic Design and Web Design professionals belong to this organization.

The AIGA Design Leaders Confidence Index is a quarterly survey of influential members constructed to provide a snapshot of the current conditions within the design economy. 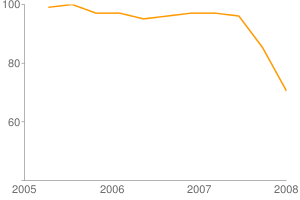 The index has dropped substantially during the last two quarters indicating a slowdown in design-related opportunities.

Despite this drop in confidence AIGA claims the design economy is expected to outperform the national economy in 2008.

According to a press release, " . . . only one-third of respondents feel [business] will decline in the next six months. Only one in four reduce their likelihood of hiring new employees."

A quick look at the Boston Market for technology talent reveals the following job opportunities at Boston.com:

This analysis, however, is crude since most organizatiions are looking for a basket of skills and don't necessarily rely on labels when searching for talent. A more precise method is to search on technical skills mentioned in job descriptions, not job titles.

A keyword search on technology skills most in demand reveals that the only two traditional Graphic Design skills to land in the Top 20 are as follows:

The remaining 15 skills, while not exclusively Web-related, do reflect skills commonly affiliated with Web Development, including programming and databases, both in an open source and a Microsoft environment. These skills have been updated for February and are listed in the right-hand column under Top 20 Web Technologies in Boston.

Developer's Note: The chart for this article was developed using Google's Chart API. Developers who want to add simple charting functionality to their Web projects should check it out.

The average information technology (IT) worker in the U.S. earns a salary of $74,600. Web Developer/Programmers average slightly less at $68,600.

Salaries in the Boston metro area are higher than the nationwide average. In fact, Boston is the second highest paying metro area behind Silicon Valley with an average IT salary of $83,500. So, the average salaries for Web Developer/Programmers in the greater Boston area are likely to be higher than the $68,600 national average.

This salary information was released this week as part of the Dice 2007 Annual Salary Survey that encompasses more than 19,000 technology professionals. Dice is "the career hub for tech insiders." A press release (pdf) is available for review.

Technology professionals continued to be in high demand in 2007, with an annual average unemployment rate of 2.1 percent -- less than half the national average.

Those technology workers with the highest average pay increases in 2007 possessed skills in the area of e-commerce.

For the first time in the history of the survey, two job titles averaged more than $100,000 in base salary. These titles were as follows: