Job losses are subsiding. The worst may be over. Prepare now for the turnaround.

Hale Stewart provides a visual analysis of job loss trends in his column at The Huffington Post. Based on one visual below, it is possible that 2010 will bring a return to net job creation. 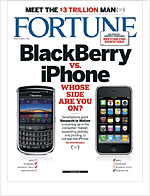 So, where should one start looking for employment opportunities? One avenue is to target large companies that have been growing during the downturn. Fortune magazine has released its list of the 100 fastest growing Fortune 500 companies.

While 21 of these companies are international, many states landed at least one company on the list. Here are the states with the most fast-growing large companies:

Here are the six fastest growing large companies in Massachusetts:

Remember, if you're trying to land work at one of these companies, take the advice offered by the 8th annual Sources of Hire Study:

"We continue to advise job seekers to NEVER apply to a company without first networking to an employee in that firm for a referral. The difference in probability of getting “up to bat” is too large to ignore."

StartUpHire is a job search engine whose mission is to connect talented individuals to exciting career opportunities at venture backed companies.

They have compiled a list of the fastest growing start-ups backed by venture capital (VC). They focused on major metropolitan markets and formulated the list based on job postings during the second quarter.

The metropolitan areas include the following:

Access a list of the fastest-growing, VC-backed companies in these metropolitan areas at StartUpHire which provides direct access to job postings in these and other cities.

The 10 fastest growing VC-backed companies in and around Boston are as follows:

[ NOTE: Beantown Web now features the LinkedIn Company Insider Widget. Simply log into your LinkedIn account on a separate tab, then click the "in" icon next to the company name below to identify the LinkedIn connections you might have within that organization. ]

[ NOTE: Beantown Web is now on Facebook. Facebook Fans gain access to an interactive map of the 10 fastest growing startups in the Boston area. Become a fan today! ]

TECH cocktail is returning to Beantown for the third time to help showcase the local Boston tech scene.

Events coordinated by TECH cocktail are planned for the following cities:

The Boston event will feature a handful of local start-ups providing demonstrations. Local sponsors will also be sharing their story with the technology crowd.

Eric Olson, a Massachusetts native and Bentley College alumnus, is a co-founder of TECH cocktail.

Details and registration are available through TECH cocktail.

[ NOTE: Beantown Web is on Facebook. Become a fan today! ]

This FREE networking event is coordinated by O'Reilly Media.

Ignite activities are held in more than 50 cities around the globe. Access Ignite Event Locations to see if a group has been established in your city.

The Boston event will feature the following:

Books, t-shirts and other promotional items will be raffled off.

Check out Ignite Event Wrap-ups from the previous Boston event to see if the topics are of interest to you. The list of topics for the upcoming event has not yet been finalized.

This is a fun activity -- the sixth in a series. Space is limited to the first 300 registrants and seats are filling up fast. Sign up now.

Access Ignite Boston for details and registration. Also, consider joining the Ignite Boston Facebook group to begin networking with more than 70 FOOs (Fans of O'Reilly's) in the metro Boston area.

If you are a typical job seeker expect to be unemployed for four months. If you are out of work and have a Web technology background there is one skill that will land you a full-time assignment in half the time! What is this high-demand, high-tech skill?

This single finding was reported in a quarterly report issued by CareerBuilder entitled The Staffing Supply & Demand Outlook. The study included more than 5,000 hiring managers and 9,000 workers.

This finding is consistent with the latest Beantown Web research that reveals a high demand for the following fast-growing skills:

Virtually every job description lists "excellent communication skills" as a core requirement. However, higher level soft skills are in high demand according to one survey of Boston employers:

Few activities will alter the trajectory of your career faster than upgrading specific hard skills and soft skills. If you are a Web professional consider developing a 60-plan (a strategic plan) to incorporate ASP.NET into your skill set. If you are a professional in any discipline spend 60 minutes today identifying "strategic thinking" and "leading & motivating" examples you can point to in projects you have worked on. Employers are actively looking for these hard and soft skills.

Hard skills + soft skills = 60 days to your next opportunity.

The unemployment numbers will likely continue to rise for the next 12 months according to Treasury Secretary Timothy Geithner.

Employment in the Information Technology (IT) sector, however, continues to outperform the general employment marketplace with a lower percentage of tech workers out of work.

Information Technology workers are in demand, at least those who possess technology skills that are valued in today's marketplace. This analysis shines a light on these in-demand skills.

Five of the Top 20 Web Technologies have seen impressive gains in job postings -- an increase of at least 50% since early June. The five hottest technologies are as follows:

Web professionals who possess these technical skills and are actively pursuing opportunities would do well to highlight these skills on resumes and in social media profiles.

The best value in Web technology training might be RIA Unleashed : Boston. This one-day conference is billed as New England's only conference focused on building rich internet applications (RIAs) using the Adobe Flash Platform including Flex, AIR, ColdFusion, Catalyst and other technologies.

What makes this conference attractive is the cost of ONLY $30, while the early bird supply of 100 tickets lasts. Even at the next level of $50 this training opportunity promises to be a real bargain.

[ NOTE: Beantown Web is now on Facebook. Facebook Fans gain access to an expanded listing of the Top 50 Web Technologies in Boston. Become a fan today! ]

The Social Media Breakfast was founded as an event where social media experts and newbies alike come together to eat, meet, share, and learn.

The breakfast series began in Boston and has now spread to more than two dozen cities. Social Media Breakfast was founded by Bryan Person.

The topic for the next Boston seminar is "The Power & Peril of Online Communities." The presenters are as follows:

Registration is only $7.99 and the networking could prove invaluable! Check out the Attendee List of more than 70 pre-registrants to determine if this networking event is right for you.